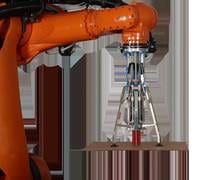 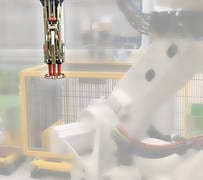 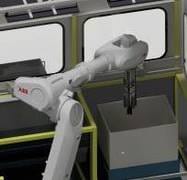 Gripping rotation-symmetrical components, which have been deposited chaotically under several layers of separation sheets is a challenging handling task. To tackle this challenge using a single gripper without set-up time meant breaking new ground and developing an intelligent solution.

Wickert Maschinenbau, Landau/Palatinate, joined forces with a gripper manufacturer to take on this challenge in order to automate the transportation system deployed in Wickert hardening facilities.

The aim was to develop a compact gripper that was not just capable of removing components such as gearwheels in individual layers from a box: the new gripper also had to be able to take off the separation sheets from the next layer of components, once all the parts in a layer have been removed, and then re-stack them again after the hardening process. The development process resulted in a multifunctional gripper fitted with a vision system. Using a camera, the handling system is able to detect not just the components and their position, but also the layer separation sheets.

The gripping of the components is carried out by means of a precise, straight movement of the fingertips above the base when opening and closing. The second gripper group moves up very closely to the gripper arm while the components are being lifted. Fitted with vacuum suction elements, this module removes the layer separation sheets. A very amply sized lift range means that no set-up is required.

Position sensors in the gripper detect the diameter of the component being gripped. Article-specific tolerance ranges are stored in the control system: this enables ongoing plausibility checks to be carried out, thereby guaranteeing a high level of process reliability right at the start of the value creation chain. Components that are not “batch-appropriate” are not even fed into the hardening system in the first place, ensuring high productivity.

Thanks to its slim design, the multifunctional-gripper can also pick and place small components in high packaging density. Moved by a robot, the fingers are always guided perfectly into the corners so that even components with very fine contours can be reached.

Depending on the geometrical shape of the components, between two and a maximum of six fingers are activated, also in groups. Thanks to this modular construction, the same gripper can perform two to three different tasks using different groups of fingers. This means that a single gripper can be used to feed blanks into a hardening system entirely automatically and without the need for set-up; after the hardening process they can be placed back in the transport boxes in multiple layers.